« Back to Latest News 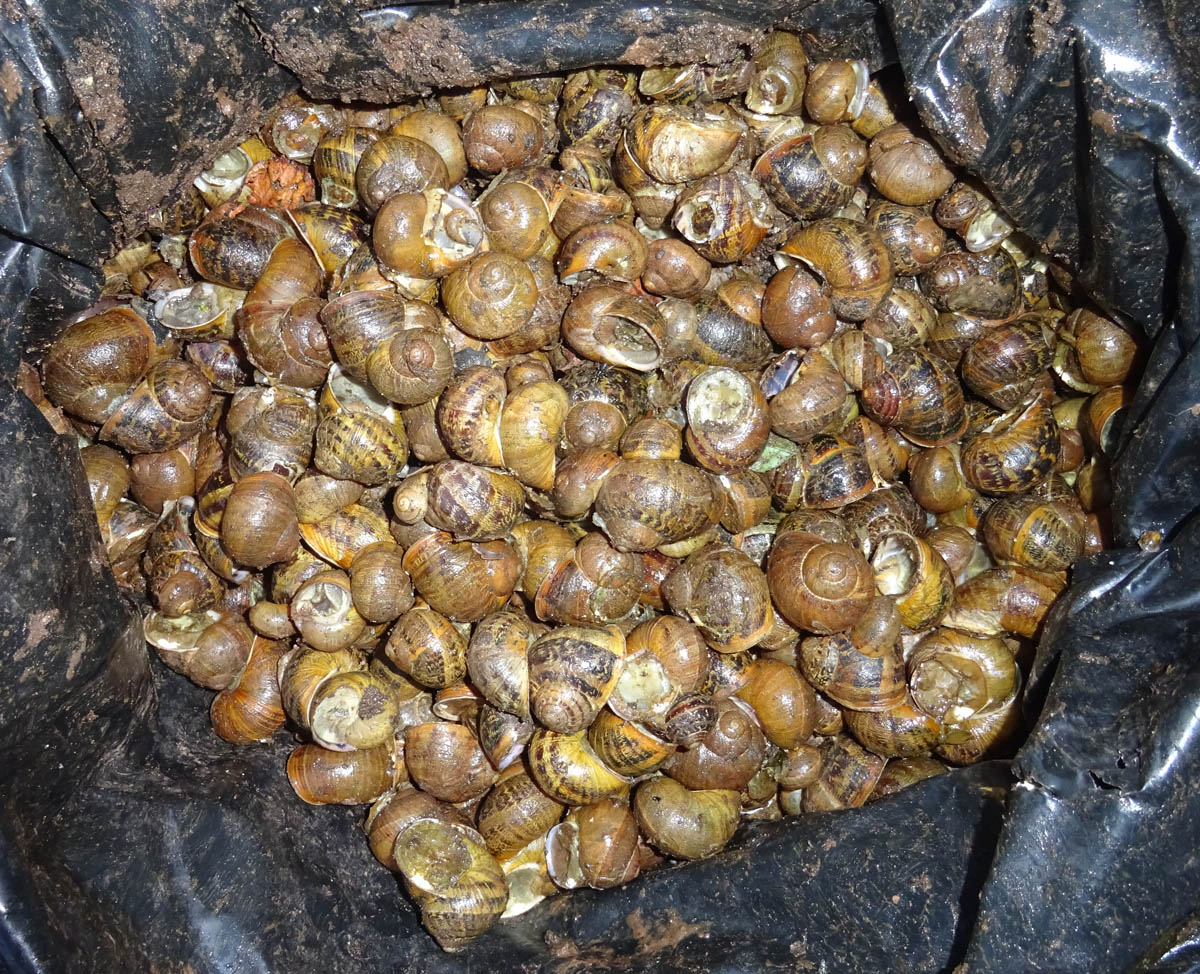 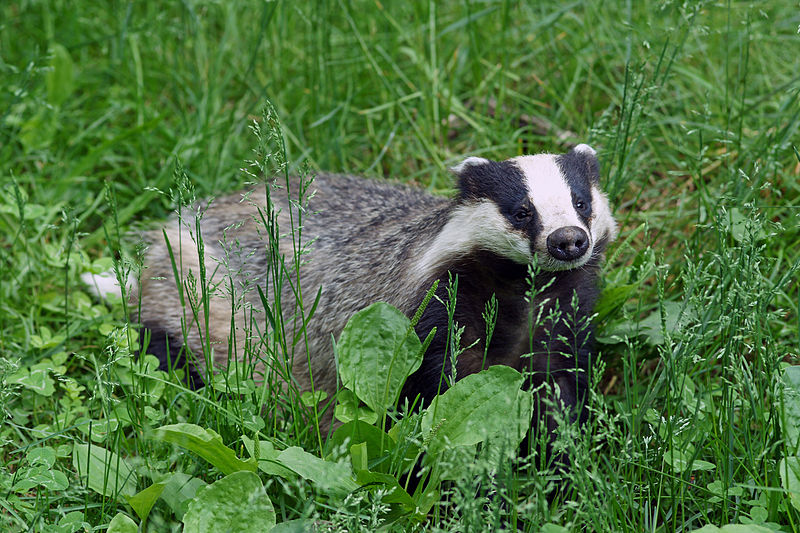 This file is licensed under the Wikipedia Creative Commons Attribution-Share Alike.

If you are walking past the 5 oaks in the middle of the park, look across the path to the other side and you will see a couple of damaged trees. These are badger scratching posts. The tree at the front has much fresher damage. I took some photos. 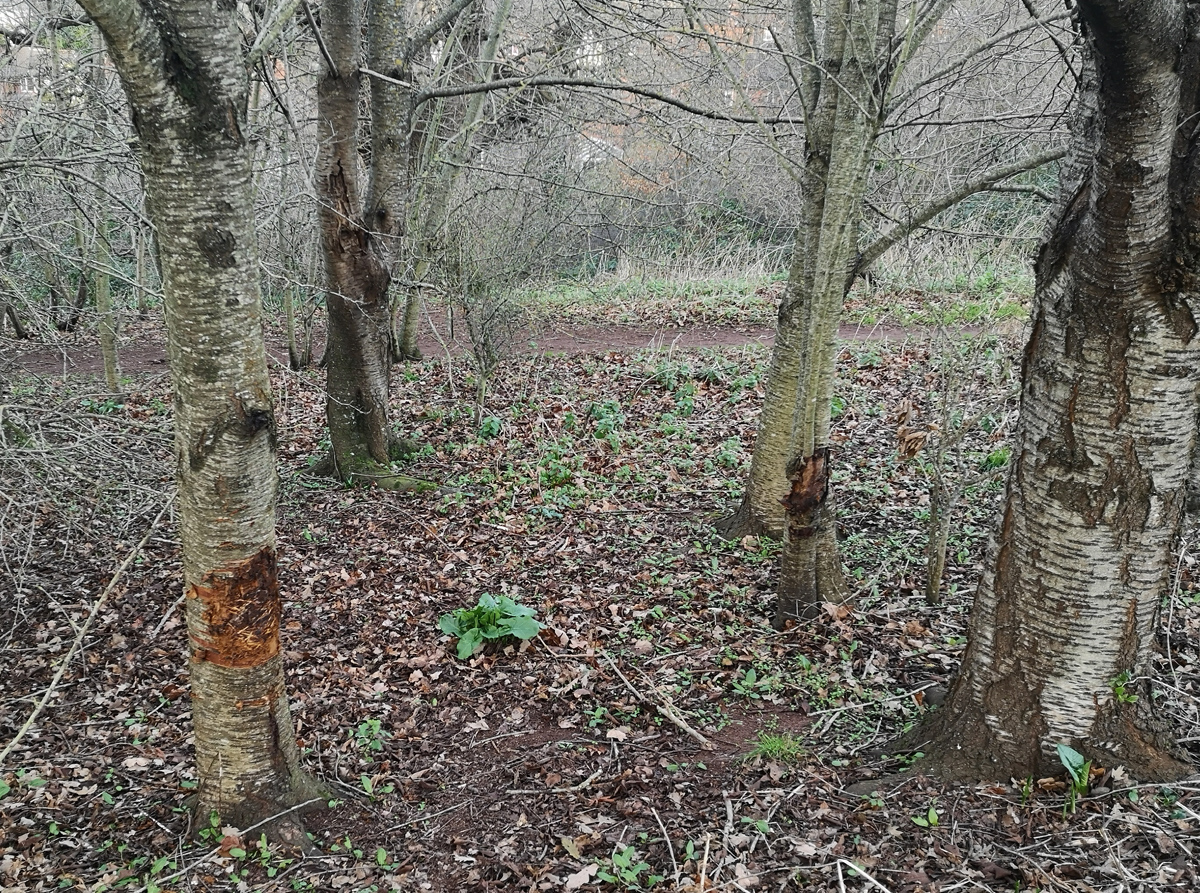 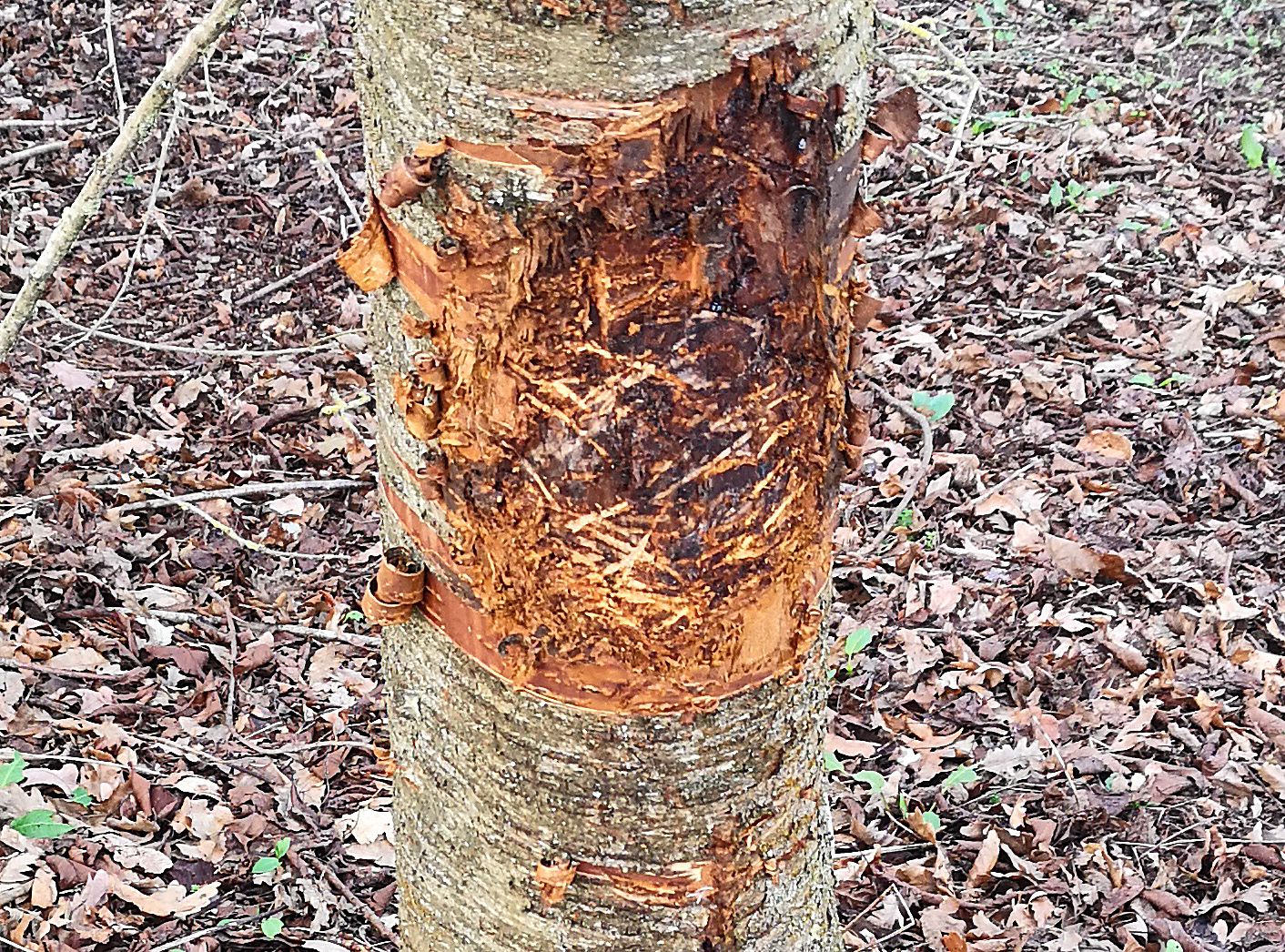 You can clearly see the claw marks. There have been badger sets next to the fields above the park for many years and this may be a way of marking their boundary. 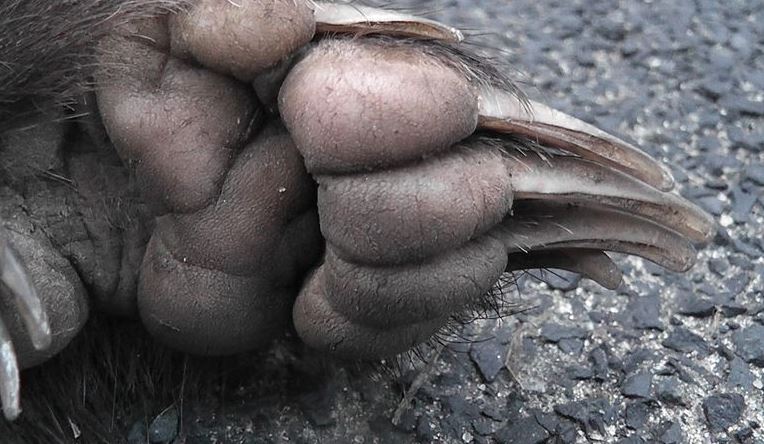 Just had this message for a snake spotter-

Whilst walking today at 1pm in Eastcliff I nearly trod on a snake at least 3ft in length, green in colour, maybe a grass snake but looked online only 2ft in length this snake was at least 3 ft and 30mm thick, never seen anything like it in uk, please inform dog walkers as it may not be native to uk, looked online all day nothing like this native.

a nightly flock of finches - Charming

Around about 5pm on the last few evenings there has been a flock (called a charm) of Goldfinches arriving in the park before they go off to roost. If you want to see them, they congregate in the tallest tree right at the top of the park. They flock together in small groups of half a dozen or so and chatter about the days business and where they found the best food etc. Then they fly off and get together with other groups and come back a minute or so later with an even bigger flock. They keep on doing this until by about 5.15 tonight there were now just two flocks of about 100 each in and out of the tree all chattering away. Small groups then split up and start heading off to roost. I don't know where but they all headed North in the direction of Dawlish. By 5.30 they were all gone and it was quiet again. 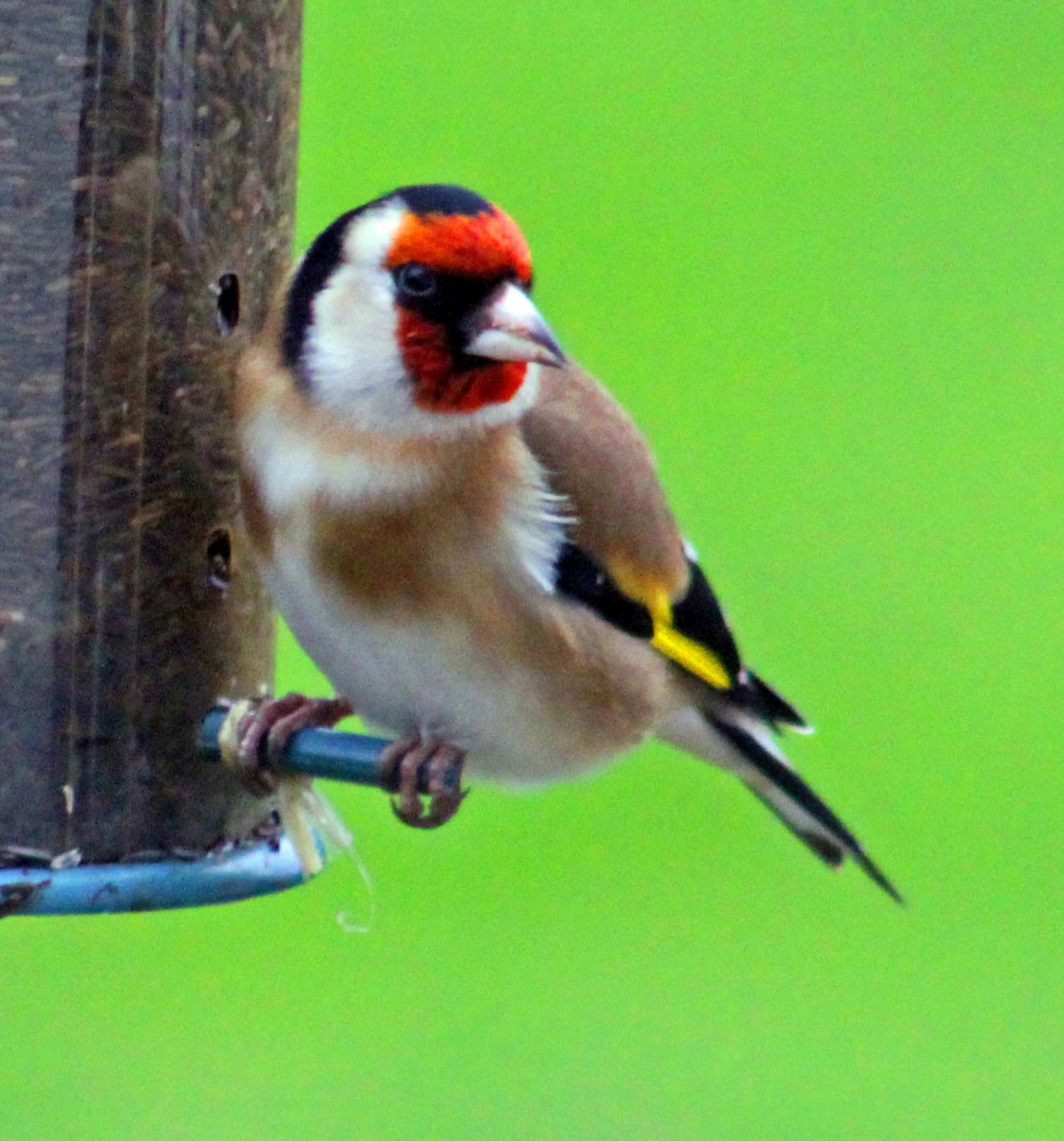 Flocks of Goldfinches arrived in the park this weekend.

And a flock or group of them is called A CHARM !

The autumn population is increased by the passage of European birds down eastern Britain. The sudden cold spell in the North may have brought them down here. Some of our breeding birds migrate to France and Spain, but birds that migrate one year will not necessarily migrate in others.

Goldfinches feed on various tree seeds, such as alder and birch, and on thistle, teasel and dandelion seeds, which it can obtain owing to its thin bill and light weight.

Niger seed and teasels may attract them into your garden, but they will also feed on sunflower hearts.

You may see them in the park in rough ground with thistles and other seeding plants, and they like orchards, gardens, heathland and common.

They have recovered from a serious decline in the 1970s and 80s caused by the increased use of herbicides. 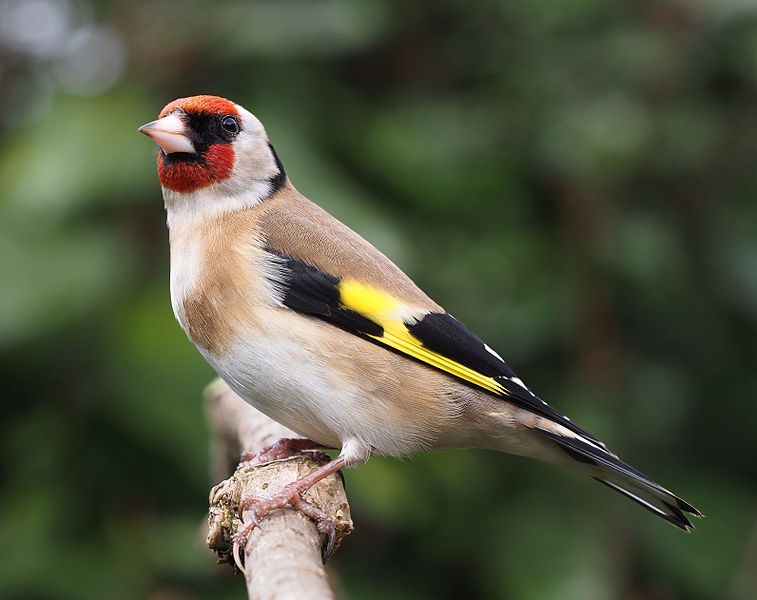 Their populations declined during the late 1970s and early 1980s, but increased dramatically during the 1990s. A recent decline in numbers has been linked to an outbreak of trichomonosis, a parasite-induced disease which prevents the birds from feeding properly. 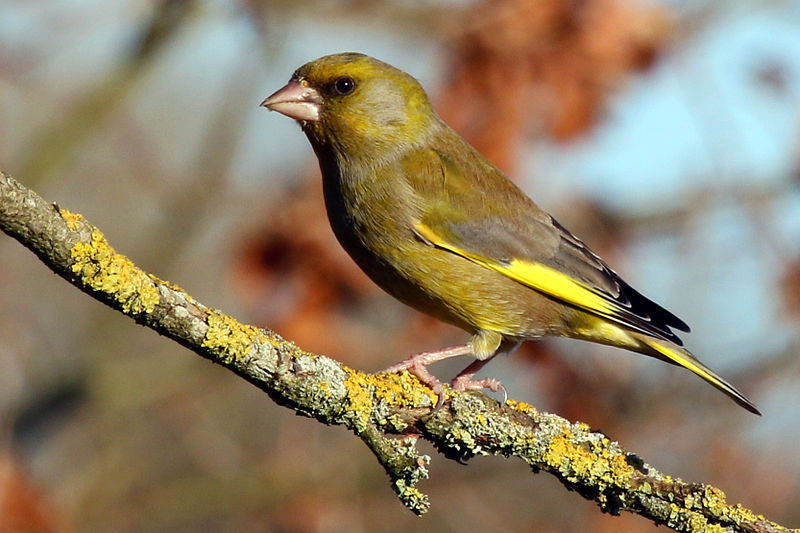 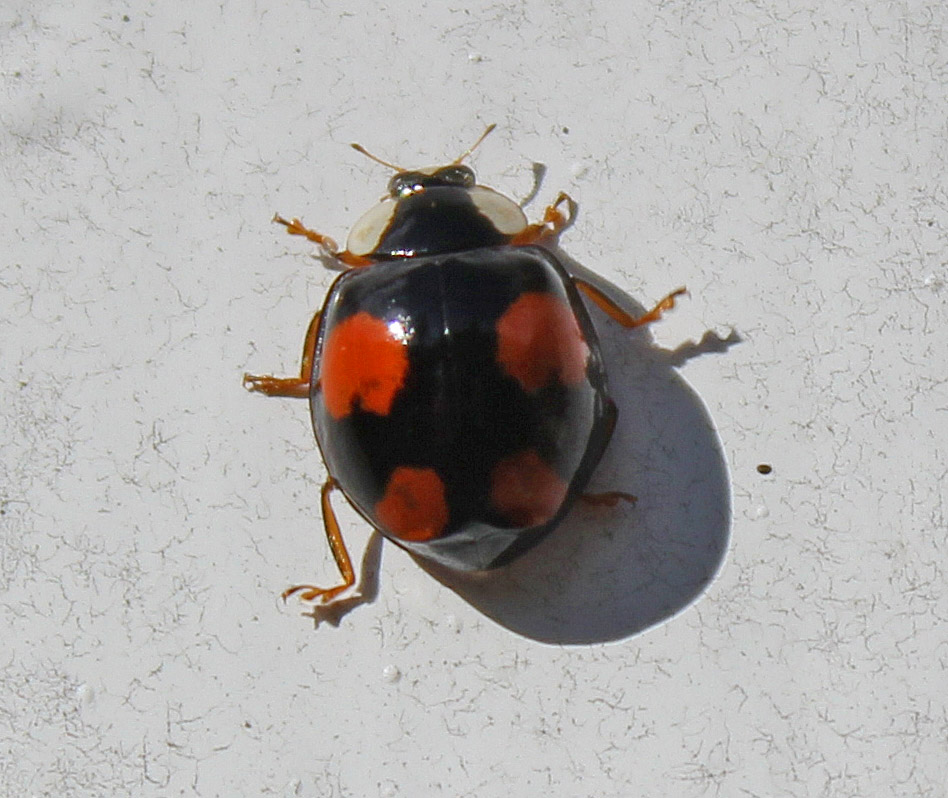 Millions of alien ladybirds riddled with sexually-transmitted diseases are winging their way into our park.

The harlequin is regarded as the most invasive ladybird species on earth.

It is larger and more aggressive than other ladybirds and will even eat them.

The bugs, which have black wings rather than our common red, are flying in from Asia and North America on the mild autumn winds, and pose a major threat to our native ladybirds because they carry an STD called Laboulbeniales fungal disease.

The fungus, which is passed on through mating, will infect our native species which are already under threat from habitat loss.

Our natives photographed the same day with the Harlequins-

PLEASE NOTE - after watching Gardeners World today 28th July 2017 the following may well be other forms of Harlequins and not natives. See link to harlequin identification survey here 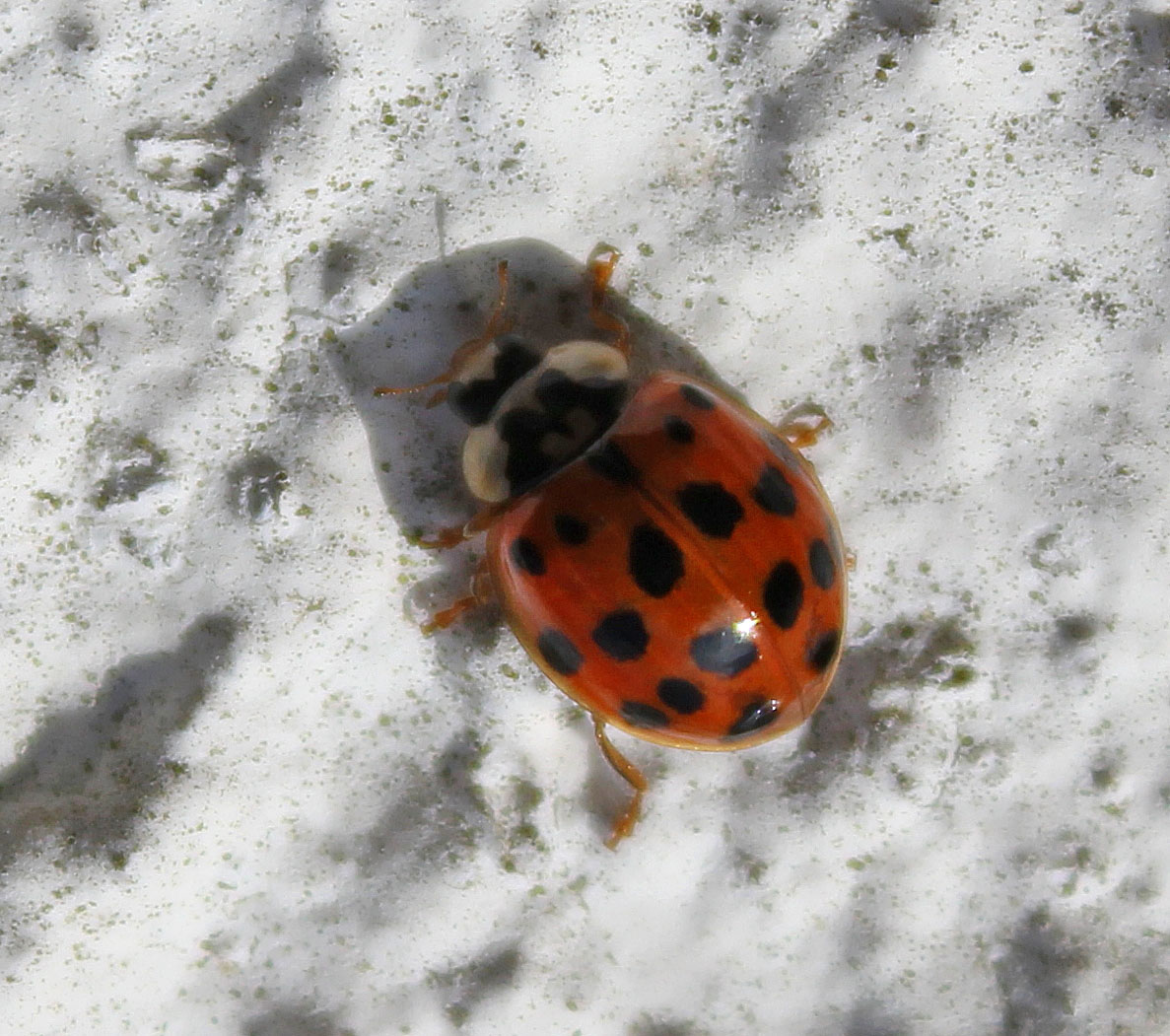 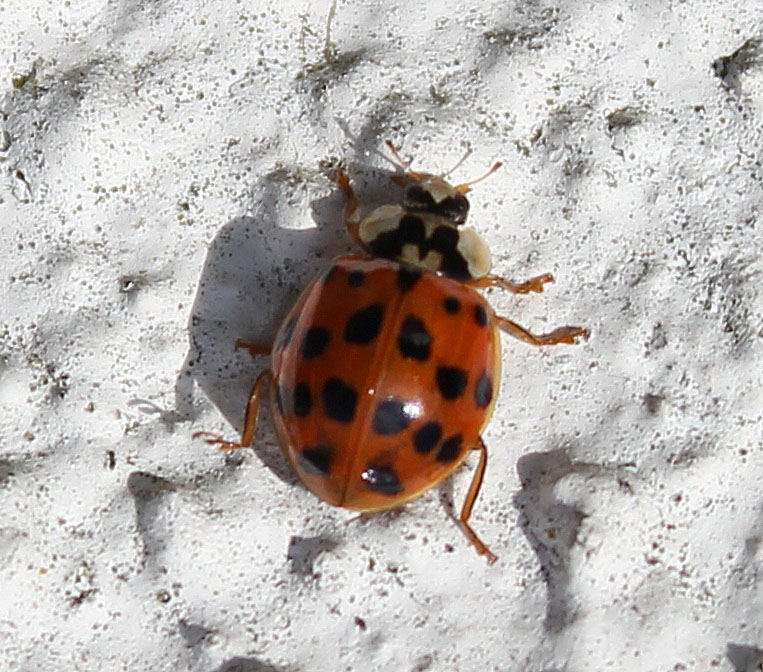 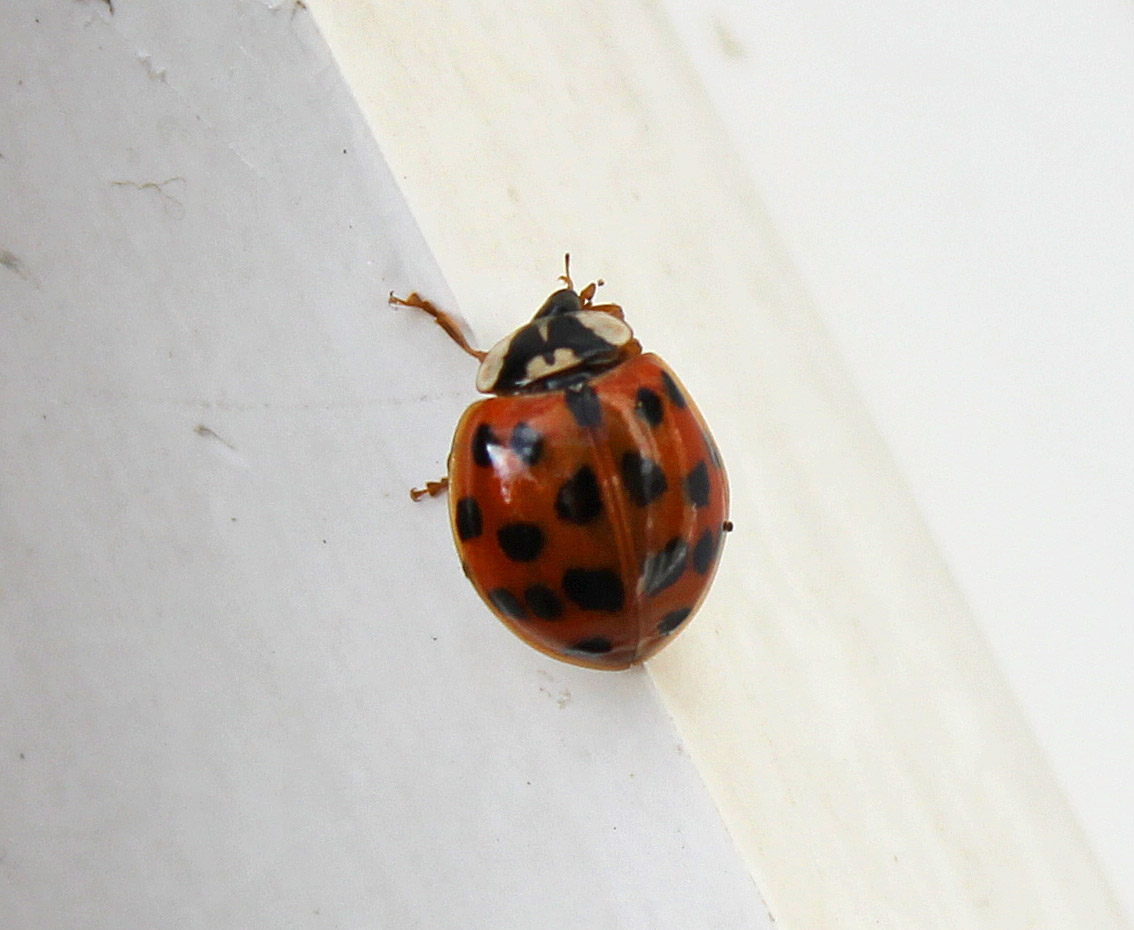 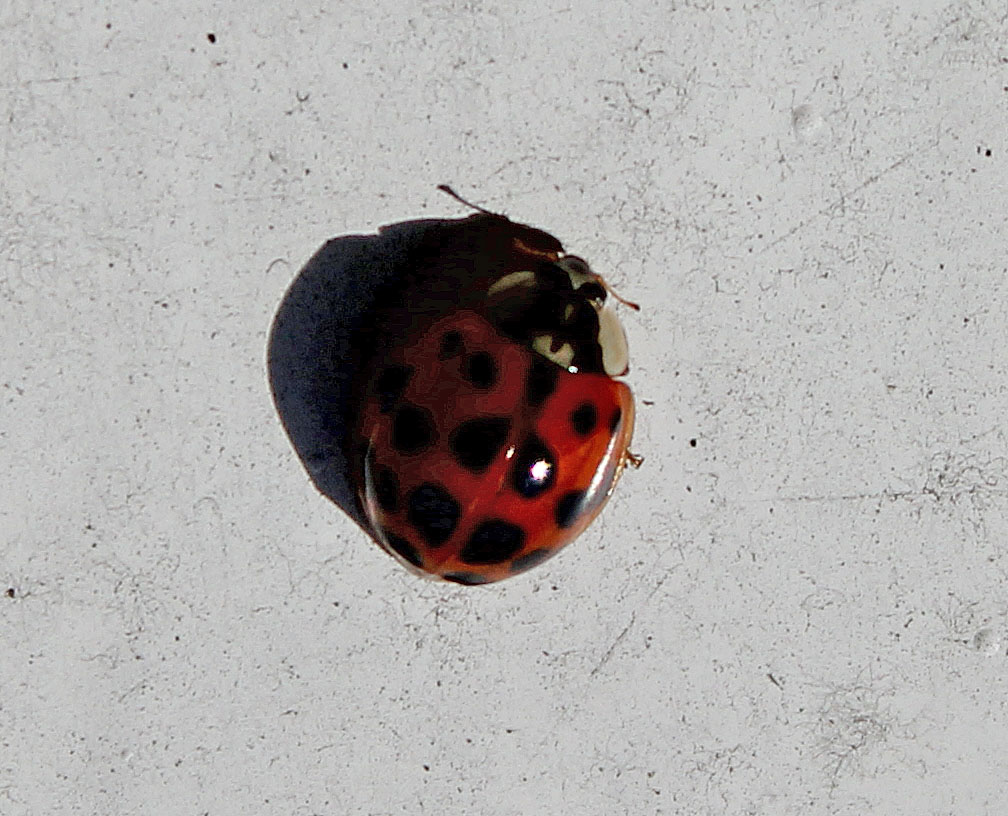 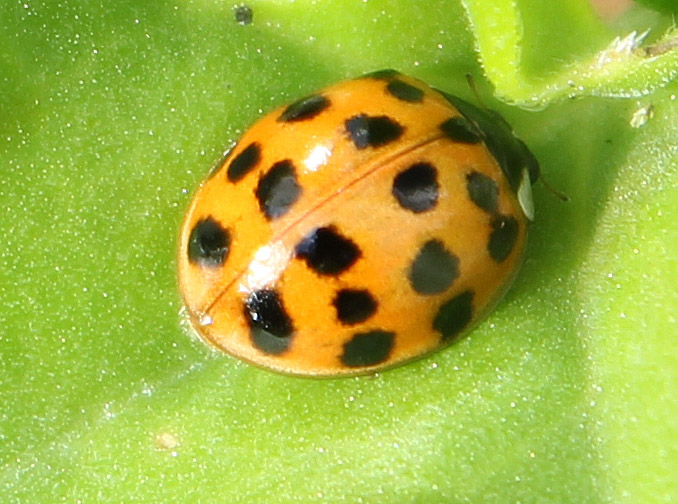 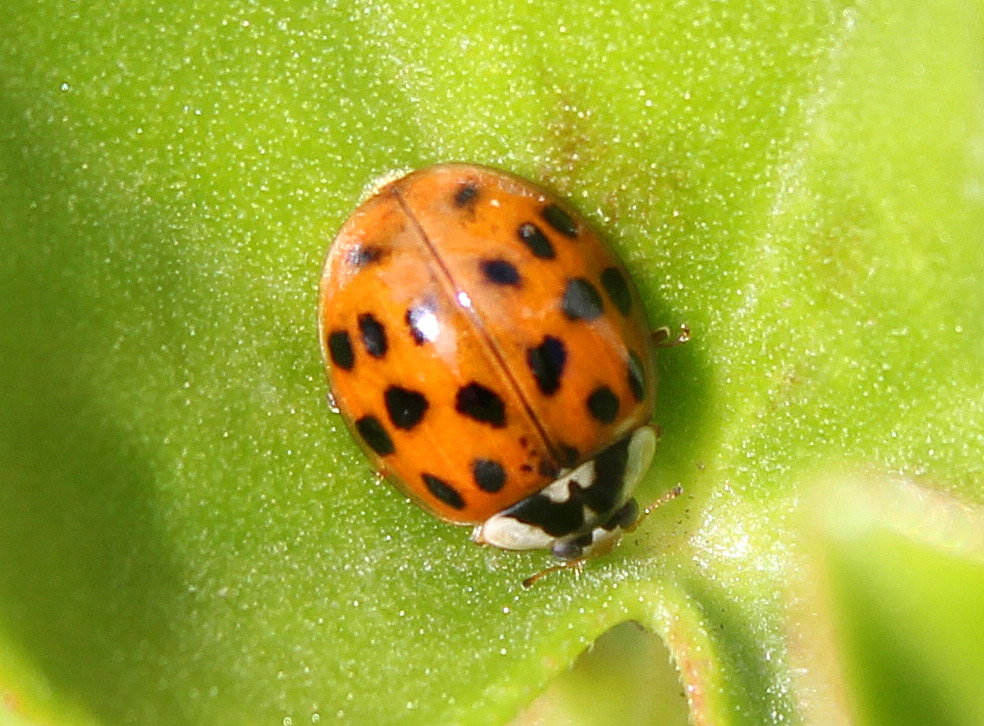 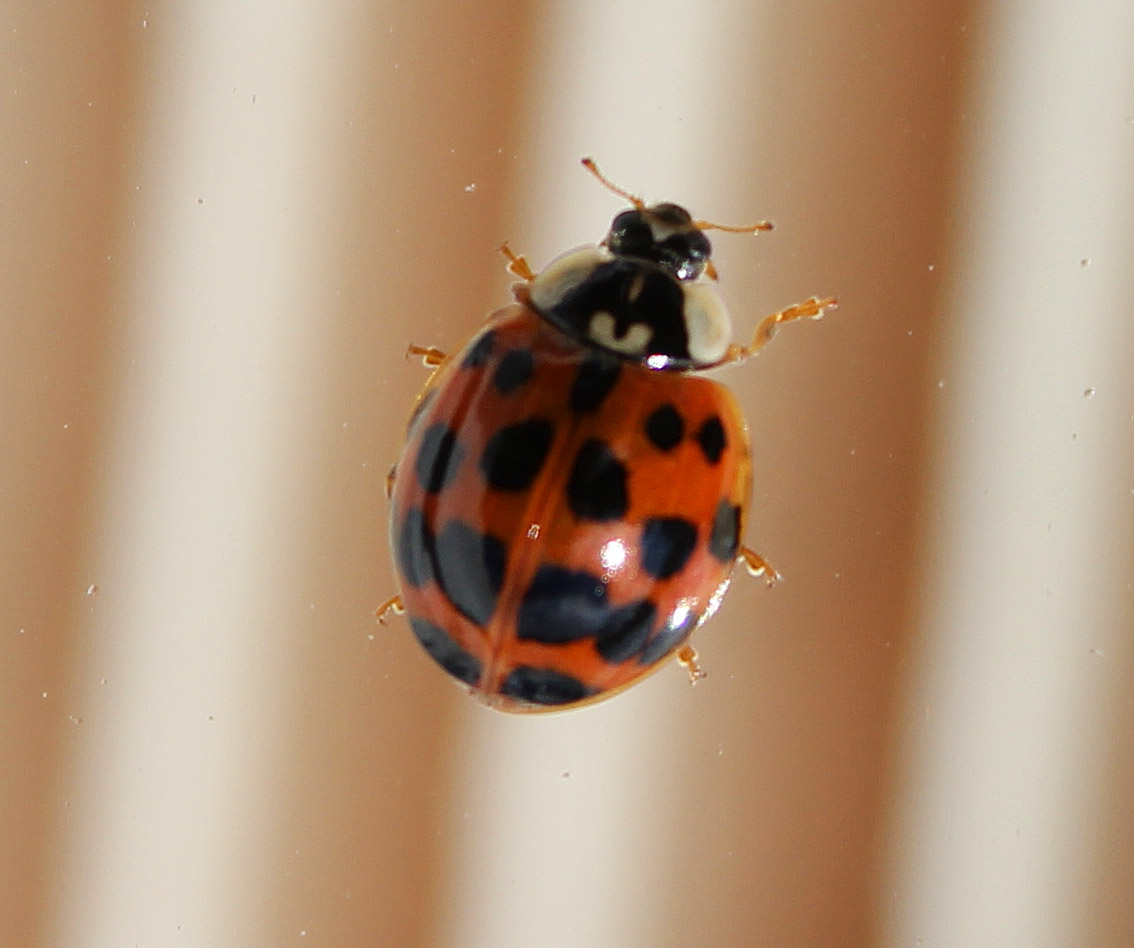 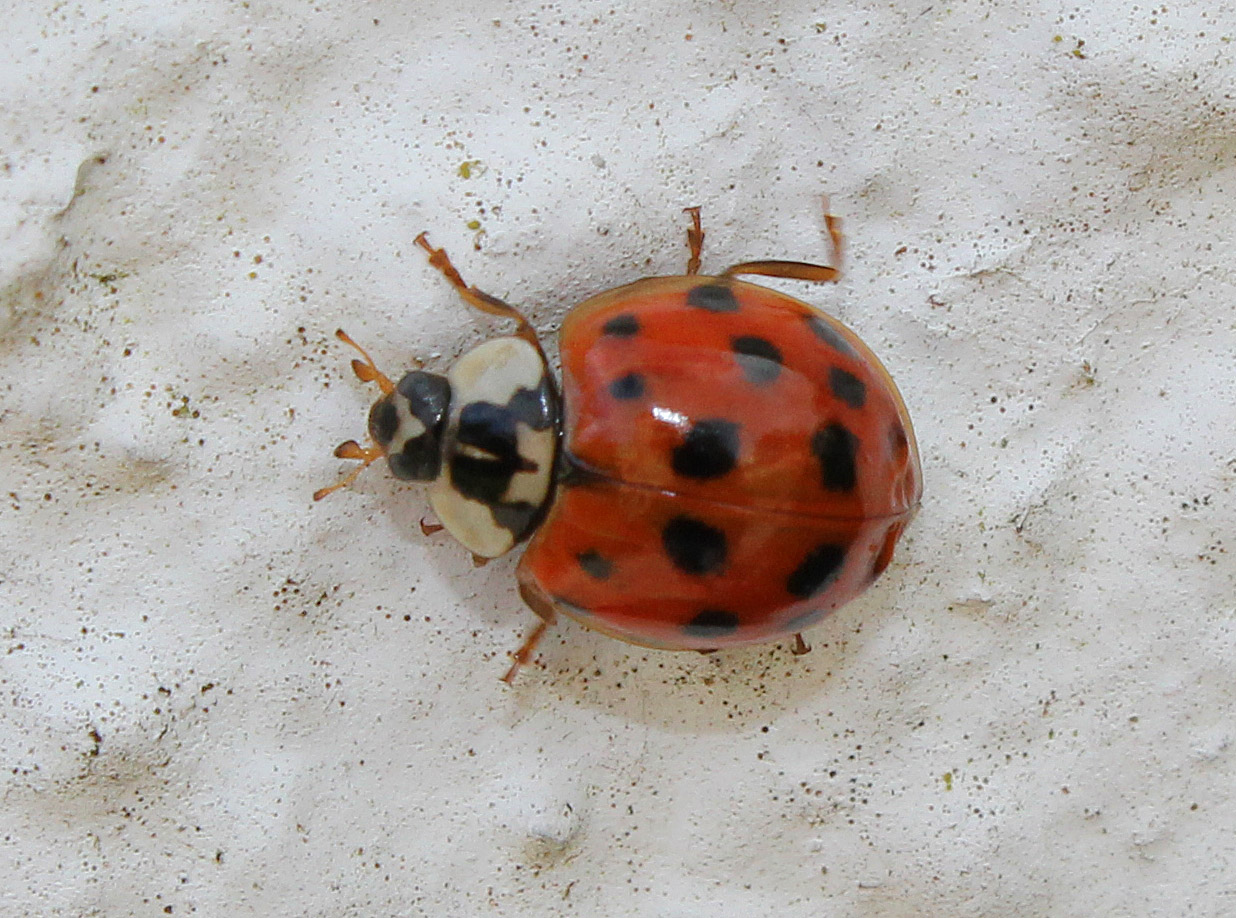 Large gatherings of harlequins can give off a chemical smell and in centrally-heated houses they may be woken up from hibernation by the warmth and fly around the house.

The Buglife nature charity says that though harlequins are not a direct threat to humans, they can leave a nasty smell and crawl over your furniture, leaving unsightly stains, so people are advised to watch out.

Everything you need to know, from harlequins eggs to ladybird, all the facts can be found here

Here they are again - 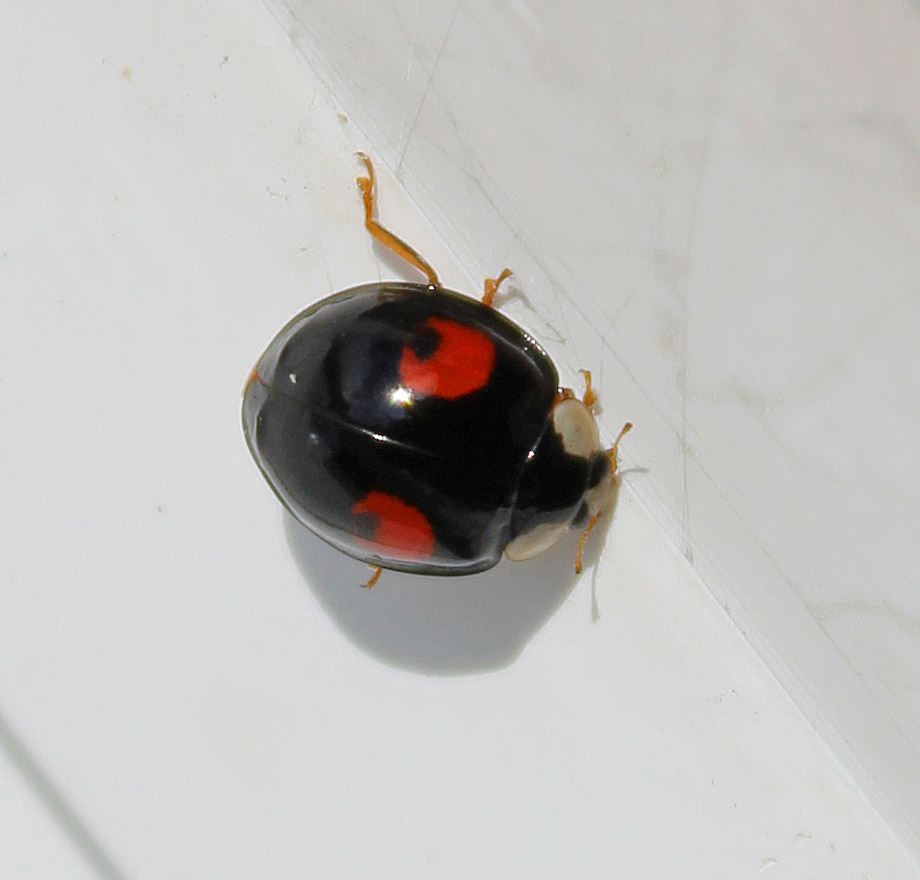 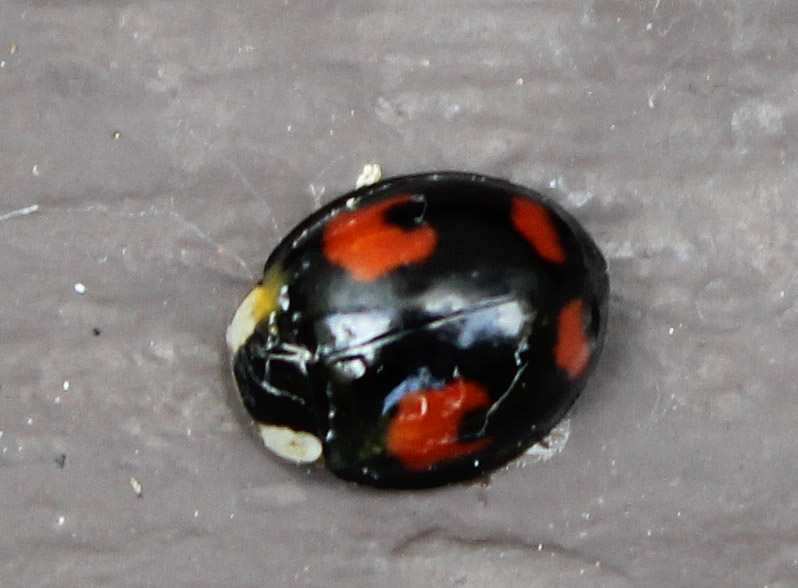 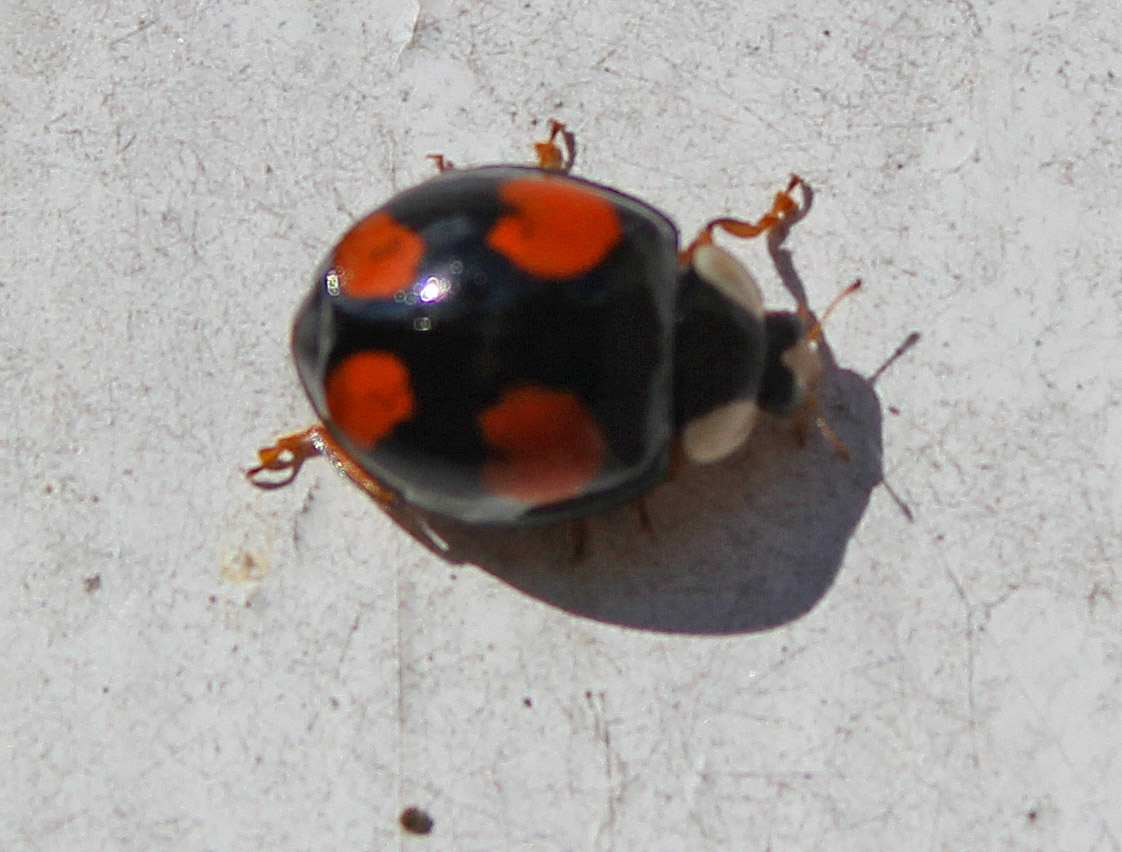